The Northeastern State University band program has been a rich and vibrant part of this university for over 85 years. From a small, student-led group in the early twentieth century to the full service college band program that is today, the band has been built by the hard work and dedication of a special collection of faculty and students. Many people have passed through the gates of the NSU band and all have left their personal footprint, making the band program a strong and vigorous organization.

The first band was started in 1927 and was led by student S.R. Lamb. In 1929, student Henry Minsky was appointed director, a post he would hold until 1945. Upon his graduation in 1930, Minsky was named the first full-time director of the band. He worked hard recruiting students and by 1936, the band had grown from the initial 18 to 60 members. The band performed at football and basketball games, parades, and gave concerts for the community. A small dance band called the Varsity Club Orchestra played for various social events.

Minsky was granted a sabbatical for the 1936-37 school year. During this year he completed a Master's degree at Oklahoma University. While he was away, Raymond McCormick took over the band. McCormick also started the Bagley High School Band during his tenure at Northeastern.

In fall 1945, Dr. John Paul Jones became the full time director of the band. Three years later, Norman White succeeded Dr. Jones and held the position for one year, replaced by Ernest Justice who served from 1949-1951. Justice was instrumental in the planning of the Fine Arts building and the band rehearsal space that still stands today. In 1950, Lowell Lehman joined the band as a freshman sousaphone player, beginning a relationship that lasted for over 47 years.

In 1970, Lehman started the Green Country Jazz Festival, which continues to attract area school jazz bands and world class guest artists. The jazz program continued to grow to the point that it was split from the band program to stand on its own. Today, Northeastern State University is the only university in Oklahoma to offer an undergraduate degree in jazz studies.

In Spring 1971, Lehman took a short sabbatical to pursue a doctoral degree at Oklahoma University. In his brief absence, David Laney led the band program. Lehman returned to the position in the summer of 1971. Under his direction, the band was invited to play at the divisional meeting of the College Band Directors National Association in 1978, a high honor for any university concert band.

In the fall of 1980, Robert Bailey was hired to serve as the trumpet instructor and assistant band director under Dr. Lehman. After a few years of this arrangement, Dr. Lehman decided to leave the day to day direction of the band program to Dr. Bailey and concentrate on classroom teaching, which he did until his retirement from the university in 1996.

In August 1999, Dr. Jeff Bright took over as the Director of Bands, a position he held until 2007. In Fall 2007, Dr. Norman Wika assumed the position of Director of Bands. Dr. Wika conducted the NSU Wind Ensemble, Communiversity Band, and taught conducting and applied low brass. From 2007-2011, Dr. Wika also directed the RiverHawk Marching Band. In 2011 Dr. James Lindroth was hired as the Assistant Director of Bands and Director of the RiverHawk Marching Band. In addition to his duties with the band program, Dr. Lindroth also coordinates the music education program and teaches applied percussion.

2016-2019, Dr. James Adams was the director of bands at NSU. Dr. Adams directed the Wind Ensemble, the RiverHawk Marching Band, Communiversity Band as well as teaching low brass and conducting.

Fall 2019, Dr. Bryan Raya was hired as the new Director of Bands.

If you have been a part of the tremendous history of this organization, stay connected by joining the Green and White Network, NSU's Alumni Association. For current band activities, please check back to this website often. 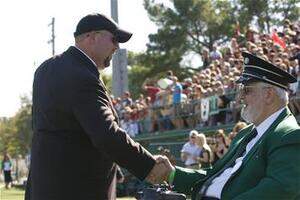