Jazz at Northeastern State University began in the 1960 s, when Dr. Lowell Lehman started the university's first jazz band. Now a professor emeritus of music at NSU, Lehman founded the Green Country Jazz Festival in the 1970 s, which has brought internationally renowned jazz artists to the region for over four decades. On November 16, 2010, Dr. Lehman was inducted into the Oklahoma Jazz Hall of Fame for his service in jazz education.

In 1992, former NSU President Roger Webb approached the university's instructor of jazz, Joe Davis, to inquire about finding a place where jazz students could practice their craft and other NSU students could come together in an informal atmosphere to enjoy live jazz. Over the next several months, Webb and his staff developed a plan of action that led to the design and construction of the NSU Jazz Lab in 1993. At this time, Webb also appointed Brad Henderson to manage the daily operations of the facility. From student and faculty performances, to touring professionals, some tremendous music has passed through the NSU Jazz Lab since its inception.

Currently, the Jazz Lab is under the management of Ashley Sage. The building continues to provide a unique classroom and performance facility for the NSU jazz program and provides the community with a great space for their myriad activities.

Tragically, Joe Davis died of colon cancer in 1995. In his honor, Webb placed a neon sign over the stage door. It simply read "Joe's Place". The memories of Joe and his students Jacob Farinelli and Mike Antle are secure with those who follow jazz in Oklahoma and the region. Their contributions to jazz and life in general in this area of the country were enormous and they are sorely missed.

In the spring of 1996, NSU hired a saxophonist from the University of North Texas to lead the NSU Jazz Studies program. Under the inspiring leadership and talent of Will Campbell, the NSU Jazz Band received superior ratings at the highly competitive Wichita Jazz Festival for three straight years. Campbell was also instrumental in creating Oklahoma's only undergraduate jazz degree program.

Dr. Clark Gibson was Director of Jazz studies beginning in 2015. He served the Jazz Studies area well through outreach, recruiting, and performing widely with the Jazz Ensemble, and Jazz Combos, providing valuable experience to students.

Dr. John Petrucelli was appointed Director of Jazz Studies, Fall 2018. He came to the program as a Ph.D. graduate of the University of Pittsburgh and most recently taught at Carnegie Mellon University.

In Fall 2019, Dr. Clark Gibson returned to NSU after a year of active performing across the country and as a resident of Nashville, Tennessee. 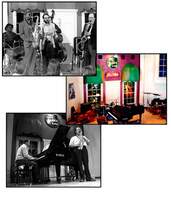