Dr. Jeffery Wall was appointed a 2-year term as Repertoire and Resource Chair for University/Collegiate Choirs in the Oklahoma Choral Directors Association beginning in July 2019.

Dr. Jeffery Wall served as an adjudicator and clinician for the Tulsa Community College Choral Festival in March 2019.

Dr. Jeffery Wall led a group of 51 travelers on a performance tour to the Republic of Ireland. The combined collaborative forces of the University/Community Chorus and the Tulsa Community College Concert Choir presented concerts at St. Mary's Church of Ireland in Killarney and St. Patrick's Cathedral in Dublin. They also performed at many historic sites, cathedrals, and upon request, in many impromptu situations during their travels. As one NSU student states, this performance tour was amazing, necessary, and should be done more often. The chorus traveled March 18-24, 2019 through the west coast to the Ring of Kerry, Moll's Gap, Killarney, and moved east through Kilkenny, Glendalough, and Dublin, among many other places. 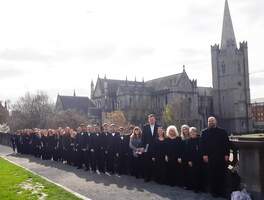 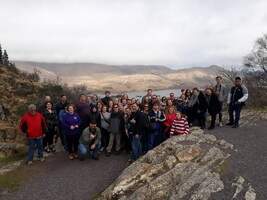 Dr. James T. Lindroth, Associate Professor of Music Education, was invited to be an adjudicator for the Large Ensemble Music Festival held on March 6, 2019 at Bartlesville High School. Dr. Lindroth provided detailed feedback on all performing groups and their music directors.

Dr. James T. Lindroth, Associate Professor of Music Education, was invited to adjudicate the OSSAA Solo and Ensemble Festival on February 28, 2019 at Tahlequah High School. Middle and High School musicians from the northeastern part of Oklahoma were represented at this event.

Dr. Jeffery Wall traveled to Winston-Salem, North Carolina to clinic and guest conduct in performance the Salem College Choir, the Salem Academy Choir, and the Winston-Salem Youth Chorus on November 8-10, 2018

Dr. Jeffery Wall was contracted to adjudicate the Arkansas State Choral Festival, where he scored and provided feedback to over 120 choirs over 4 days April 10-13, 2018.

Dr. James T. Lindroth was invited to be a Music Performance adjudicator at the Mason Music Invitational Band Contest in Mason, Ohio on October 13, 2018. This event included 20 bands from the Mid States Band Association.

Dr. James T. Lindroth was invited to be a Percussion adjudicator at the La Salle Music Invitational Band Contest in La Salle, Ohio on October 5, 2018. This event included 25 bands in the Mid States Band Association.

Dr. James T. Lindroth was invited to be a Percussion adjudicator at the Colerain Music Invitational in Colerain, Ohio on October 4, 2018. This event included 22 bands from that area.

Dr. James T. Lindroth was invited to adjudicate Percussion at the Oklahoma Solo and Ensemble Festival at Skiatook High School on March 3, 2018.

Dr. Jeffery Wall was invited to clinic and conduct a concert for Bixby Public School's "Boys Night Out" on March 12, 2018.

Dr. Jeffery Wall was invited to present an interest session on the use of social media for choir recruiting and marketing at the Southwestern Division of the American Choral Director's Association in Oklahoma City on March 7, 2018 and reprised it for the Oklahoma Choral Directors Association on July 17, 2018..

Dr. Jeffery Wall was invited to present an interest session titled, "3 Snaps in a Circle: A Method of Recruiting & Marketing Music through Social Media" at the national College Music Society conference in San Antonio, TX on October 26, 2017.

Dr. Jeffery Wall's publication titled, "Intentional and Expressive Conducting: It's all in the Rebound," was selected for print in the March 2015 issue of the Choral Journal.

Dr. Jeffery Wall was to invited to present an interest session titled, The 3Ms: Metaphor, Movement, and Musicianship" at the Arkansas Music Educators Association convention in Hot Springs, AR on November 7, 2013.

Dr. Ronald Chioldi s textbook, Keyboard Musicianship, Book 2 will be published in February, 2015 By Stipes Publishing. Along with the other coauthors, he will be a presenter at the national MTNA conference in Las Vegas.

On November 1, 2014, Dr. James T. Lindroth was invited to adjudicate the Palmetto Ridge Invitational Music Festival in Naples, Florida. He evaluated 20 high school bands in the caption of Music Performance along with providing a clinic for two bands.

Dr. James Lindroth was invited to be an adjudicator at the Lewisburg Music Invitational Band Contest on October 4, 2014. This event included 20 bands from Tennessee and Mississippi high schools. Dr. Lindroth evaluated bands in the caption of Music Performance and gave a private clinic to two Memphis, TN area bands.

Dr. James T. Lindroth's research paper entitled "Reflective Journals: A Review of the Literature" has been accepted for publication in the music education research journal UPDATE: Applications of Research in Music Education. Dr. Lindroth's manuscript is currently in press and will be published sometime in 2015.

During the 2014 summer, Dr. James Lindroth served as a music instructor for the Medellin Gran Banda from the country of Columbia. This group toured on the DCI SoundSport circuit performing in Florida, Alabama, Georgia, West Virginia, and Indiana. The ensemble received Gold Medals and were the 2014 DCI SoundSport Grand Champions. 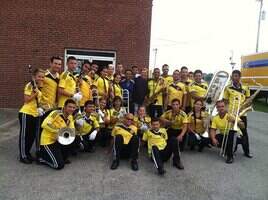 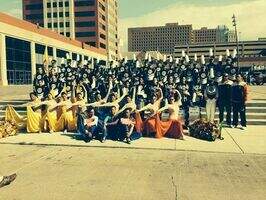 Dr. James Lindroth was invited on February 13, 2014 to present a master class for all high school percussionists at Union High School. Topics covered included timpani and multi-percussion technique along with examining musical choices in solo literature. On February 22, 2014, Dr. Lindroth adjudicated percussion at the Solo and Ensemble Festival at Broken Arrow High School.

Dr. Anne Watson released a new CD, Raretes Romantiques, on the Potenza Music label. It contains works by female composers from the romantic era. Visit the Just for Winds website to hear excerpts or purchase the CD.

Dr. Anne Watson was awarded funding for an NSU Faculty Research Grant for the 2012-2013 academic year. Her research is over selected works by female composers written for the clarinet during the nineteenth century and will include scholarly editions as well as a professional CD recording.

Dr. James Lindroth, assistant professor of music, and the RiverHawk Marching Band were featured in an article about the growth of the NSU band program in the Tahlequah Daily Press, which may be found here.

Dr. Mark Bighley, professor of music and chair of the Department of Performing Arts, was granted the "Faithful Servant Award" of the Association of Lutheran Church Musicians. He received the honor July 25, 2011 in Seattle at the ALCM's 13th biennial conference. Bighley was a founding member of the ALCM, chaired its constitution committee, chaired a national convention committee in 1989, was the first national vice president from 1985-89 and edited the journal CrossAccent from 2003-11.

Dr. Anne Watson received the university-wide Model the Way award in August 2011, an annual award given to two faculty and two staff for their contributions to the university. She also performed as principal clarinet with Light Opera Oklahoma during Summer 2011.

Dr. Mark Bighley published the article "Martin Schalling's 'Lord, Thee I Love with All My Heart'" in CrossAccent, the Journal of the Association of Lutheran Church Musicians (2011, XIX/1, 34-47). In addition, he performed faculty organ recitals in Tulsa and Tahlequah. He also performed a recital at the First Presbyterian Church in Oklahoma City.

Over Spring Break, Dr. Anne Watson, founding Ironwood Trio member, was involved in a tour of universities in both Arkansas and Missouri. With the other two Trio members, she performed in recitals and gave masterclasses at each university.