Choral music at Northeastern State University boasts a long-standing tradition that begins with the university's early heritage.  The Northeastern State Normal School was established in 1909.  The Normal Choral Club was organized the same year under the direction of Ms. L. Louise George.  By 1910, The Choral Club had a membership of fifty.  It had "for its object the study and public rendition of operettas, cantatas, and oratorios." Additionally, there was a Young Men's Glee Club, a Young Ladies' Glee Club, both solo male and mixed quartets, and a sextet.

The Glee choruses, Normal Chorus, and other Mixed Ensembles remained a mainstay under several different directors through the 1930s.  In 1939, the Northeastern Normal School's name changed to Northeastern State College.  For a time, the large chorus was named the Mixed Ensemble of NSC.

In May of 1950, Ralph Whitworth was hired.  He took a sabbatical to complete his doctorate in 1959 and remained on faculty through another name change to Northeastern Oklahoma State University in 1974.  Dr. Whitworth collaborated with other faculty directors to present the first annual Boare's Heade Feast in 1971.  It became a tradition for many years to come with Renaissance style costumes, sets, singing, and jesters in a madrigal dinner setting.  The Chorus and University Singers enjoyed a period of musical stability and growth under Dr. Whitworth's direction until his retirement in 1984.

Donald Studebaker was hired on as Director of Choral Activities in April of 1984.  Studebaker completed his doctorate in 1988.  In 1990, Dr. Studebaker was promoted to Associate Professor of Music and in 1996, he achieved the rank of Full Professor.  In 2006, Chorus rehearsals were moved to the evening and community members were invited to join, henceforth making it the University/Community Chorus.  In addition to his duties at NSU, Studebaker was also the conductor of the Tulsa Oratorio Chorus until 2009.  He remains an active member of the Tahlequah and Tulsa music community.

Canadian native, Dr. Vaughn Roste, was named Director of Choral Activities in the fall of 2011, and remained on faculty for two years.

Dr. Jeffery Wall joined the music faculty at NSU in the fall semester of 2013.  He achieved the rank of Associate Professor of Music in 2016 when he also assumed the role of Department of Music Chair and received the rank of Full Professor in 2021.

If you have been a part of the tremendous history of these organizations, stay connected by joining the Green and White Network, NSU's Alumni Association.  For current choral activities, please check back to this website often. 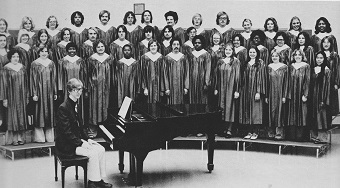 The Northeastern Chorus from 1977.

For more historical photos, see the choir history photo gallery.  If you have photos you would like to donate, please contact Dr. Wall.  All donated photos will be scanned and returned.