We are pleased to announce that tickets are now available to purchase!

This year we are back home at the NSU Playhouse and will be offering more show dates to pick from. Our season will run from June 16 - July 23, 2022 and offer two types of shows.

In Country Vinyl, we revisit the game changing songs and artists who define classic country music. From George Jones to George Strait and Loretta to Reba, we are sure to bring some of your favorite songs to the stage.

In Rock n Roll Vinyl, we take a journey through the history of rock and roll to see the songs and artists who changed the music world. From Chuck Berry to Janis Joplin to Queen, we guarantee you will love this rock and roll music trip.

Buy your tickets now at goriverhawkstickets.com or call our box office at 918-444-4500.

Patron attendance policies are subject to change due to health and safety guidelines. Patrons will be given notice if these policies change.

For the safety of our performers and patrons, all of the front of house team, box office team, and theatre technicians will be wearing a mask for all performances. We strongly encourage all patrons to wear a mask to ensure the safety of our unmasked performers. Without them, we simply wouldn’t be able to have these fantastic shows!

All ticket sales are final. No refunds allowed at this time.* Exchanges can be made by calling the box office at 918-444-4500.

*This is subject to change due to circumstances.

Group tickets (a purchase of 10 or more tickets) can be put on hold while the group organizer gathers a final headcount or funds from group members. All group tickets for River City Players must be paid by June 1, 2022. No exceptions. To reserve a group of tickets, please call 918-444-4505.

We currently have opportunities for businesses and individuals to advertise with and/or sponsor the 2022 River City Players! Please email Marissa at sequoyahinstitute@nsuok.edu for more information.

The History of The River City Players

Capitalizing on the talent of the university's students, the gifted faculty, and the abundance of Tahlequah tourists during the summer months, the River City Players (formerly known as the University Players) hosted their first season in 1983. C.H. Parker, now-retired Northeastern State University instructor of speech and theater, and the late Joe Davis, NSU jazz studies director, created the script for the River City Players first production, Ferlin's Folly or Dolly Goes to Dixie. In following seasons, under the direction of Cheryl Kinion, the company became known for combining the best of popular music, Broadway hits, gospel, and everything in between and River City Players quickly became one of the most popular events produced by NSU.

In 1995, C.H. Parker met Tim Gilliam, a young country and bluegrass musician who had recently returned to Tahlequah from performing in Nashville to pursue a degree in mass communication at Northeastern State University. From that initial meeting sprung the nexus for Downtown Country, the university's annual Branson-style show showcasing live country music. The first year's Country Fare evolved into NSU's Downtown Hoedown, and eventually became known as Downtown Country. Downtown Country has hosted a number of talented artists over the years, including NSU alumnae, 2005 American Idol winner and country music superstar Carrie Underwood. Around the year 2000, the two casts joined marketing and box office efforts to combine as one series known as the Stars in the Summer. In 2013 the cast returned to the name River City Players, however the legacy of Downtown Country is still continued through the country performances of the River City Players. Now in its 32nd season, River City continues to showcase our talented performers and brings audiences back year after year. 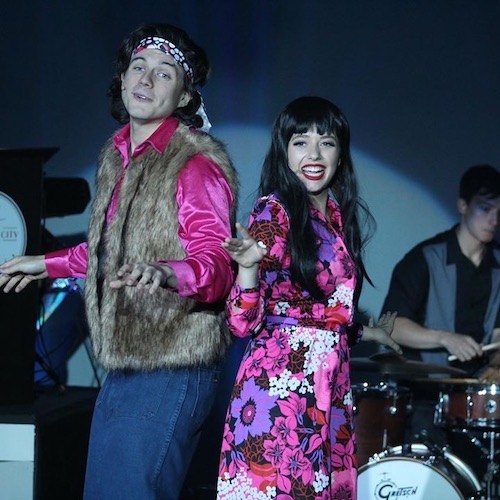 Hagen Wano and Katelyn Morton as Sonny and Cher